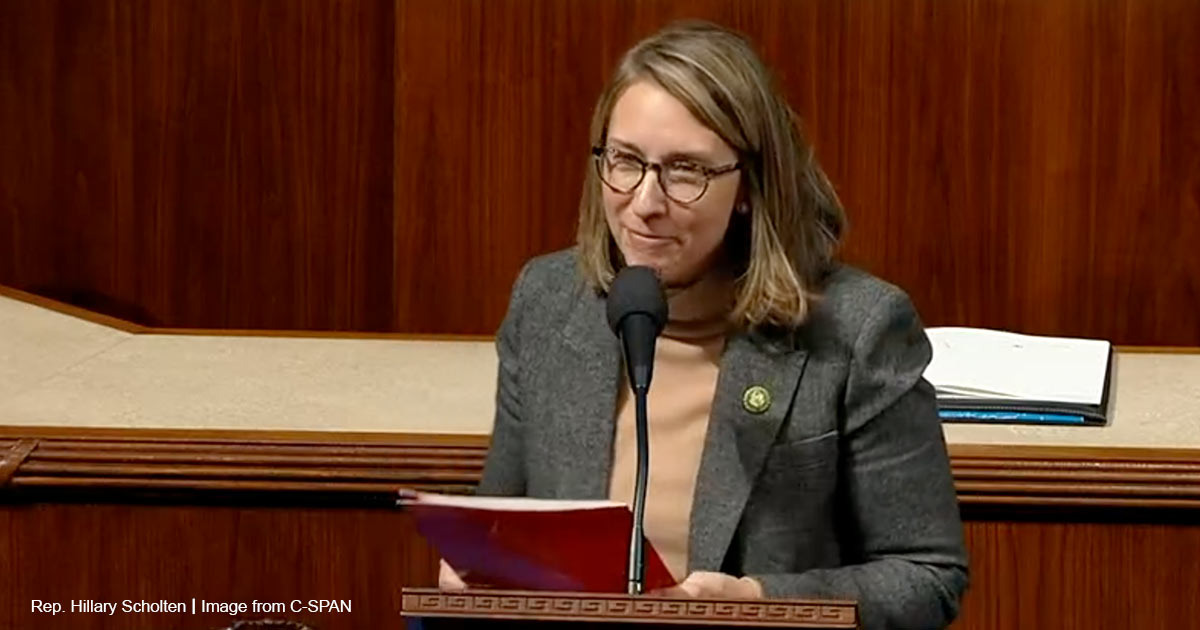 A congressional Democrat stated that a Bible verse declaring that God forms unborn human life inside the womb actually supports abortion-on-demand before voting against a law that would protect newborn children from the threat of infanticide.

During debate over the “Born Alive Abortion Survivors Protection” Act, Rep. Hillary Scholten (D-Mich.) invoked Jeremiah 1:5 — which says, “Before I formed you in the womb, I knew you” — on the House floor Wednesday afternoon to oppose the bill.

“As a pro-choice Christian who chose life, this issue is so personal to me. My faith informs my actions, but it doesn’t dictate the policy of an entire nation,” said Scholten. “And further, when I read the Scripture, I turn to passages, and I’m guided by passages like Jeremiah 1, verse 5, which states, ‘I knew You before I formed you, and I placed you in your mother’s womb.’ [It] Doesn’t say ‘the government’s womb,’ or ‘the Speaker’s womb.’ It says ‘the mother’s womb.’”

The word “mother” does not appear in the Hebrew, Greek, or Latin manuscripts of Jeremiah 1:5. Only in a handful of Bibles did lax translators add the word “mother” to the text. Scholten appears to have paraphrased, or misquoted, the verse, as her quotation does not match a single version of the Scriptures at BibleGateway.com.

“I believe life is precious, but I reject the idea that if I embrace the sanctity of life, I also must be forced to let the federal government in to regulate it,” Scholten continued, echoing Senator Raphael Warnock (D-Ga.). “We must protect families from unnecessary government intrusion into the most sacred and personal decision of our lives.”

Rep. Hillary Scholten (D-MI): "As a pro-choice Christian who chose life, this issue is personal to me... When I read scripture, I turn to Jeremiah 1:5 which states 'I knew you before I formed you and placed you in your mother's womb.' It doesn't say the government's womb." pic.twitter.com/IH6Z2KhT4f

Scholten’s remarks seemed doubly odd as the bill has nothing to do with abortion. H.R. 26 would amend federal law to specify that children born alive must receive the same level of lifesaving care wherever they may be born, including inside an abortion facility after a botched abortion.

“Congresswoman Hillary Scholten (D-Mich.) offered one of the most twisted pro-abortion apologetics in recent memory,” David Closson, director of the Center for Biblical Worldview at Family Research Council, told The Washington Stand. “The congresswoman’s suggestion that Jeremiah 1:5 — one of the most pro-life passages in the Bible — actually supports abortion is eisegesis of the highest order. The passage clearly teaches continuity between the unborn Jeremiah, who is ‘appointed’ and ‘formed’ in utero and the adult prophet receiving God’s instruction.”

“But it is also profoundly immoral,” said Closson, “since it intentionally misuses Scripture to advance a position at odds with the entire pro-life message and posture of Scripture.”

The meaning of the verse, in which God assures Jeremiah of his election as a prophet from his conception, was better captured by Rep. Nathaniel Moran (R-Texas), who said in his first speech on the floor, “Every life is a gift, and every life has a calling given by God.”

Christians for 2,000 years have interpreted the Scripture to consider abortion among the worst sins. Observant Jews likewise say Judaism does not support abortion-on-demand; instead the Torah, Tanakh, and rabbinical tradition of the Mishnah and Talmud teach a pro-life position on abortion.

“While most people do not expect politicians to handle Scripture with the same care as a trained theologian, there is a general expectation that lawmakers will at least try to understand what a given passage teaches and not grossly misuse or misquote it,” Closson told TWS.

A better example of scriptural exegesis came earlier in the afternoon from her colleague, Rep. Jack Bergman (R-Mich.), who represents Traverse City, when he cited Psalm 139, quoting it exactly from the New International Version (NIV) of the Bible:

I implore my colleagues … to consider the divine worth of every human life we have taken an oath to serve, from womb to tomb. It is written in Psalm 139: “For You created my innermost being. You knitted me together in my mother’s womb. I praise You, because I am wonderfully made. Your works are wonderful. I know that full well.” We should do all in our power to stand for life and to ensure the unborn get to live out each of the days that God ordained for them before one ever came to be. Let us unite as a legislature to determine that in the United States we will preserve the most basic right to life and the ability of good-willed Americans to provide life-affirming care in pursuit of that cause.