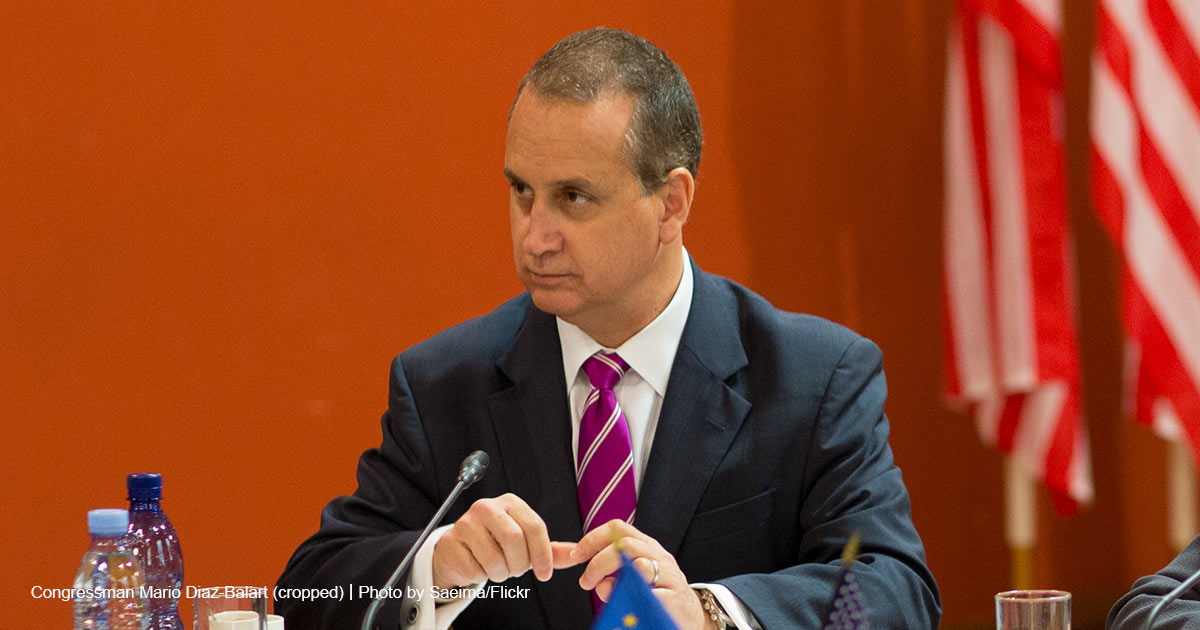 Second Congressman Renounces His Vote for ‘Disrespect for Marriage’ Act

Another one of the 47 House Republicans who voted for the so-called Respect for Marriage Act has withdrawn his support, charging Democrats with “failing to provide legitimate safeguards for faith-based organizations” that hold “deeply-held religious beliefs” about natural marriage.

Rep. Mario Diaz-Balart (R-Fla.) announced on Monday that he will reverse his vote in favor of H.R. 8404, which skeptics call the “Disrespect for Marriage” Act. Although he favors laws that would equate same-sex relationships with marriage and once voted for the “Equality” Act, he said this bill goes too far.

“My record shows that I am a long-standing advocate against discrimination of all types,” he said. “I, however, cannot support any effort that undermines religious liberties by failing to provide legitimate safeguards for faith-based organizations that object based on their deeply-held religious beliefs.”

The proposal would allow federal law to override state constitutional marriage protection amendments and allow private individuals to sue business owners for “harm” resulting from the owner’s faith-based refusal to participate in a ceremony he or she believes to be a sin. The U.S. Senate passed the bill last Tuesday, 61-36. A more punitive version of the bill passed the House on July 19 with 47 Republican votes, including that of Diaz-Balart.

But the Florida Republican chided Senate Democrats for rejecting religious liberty amendments and other protections for Christians offered by Senators Mike Lee (R-Utah), James Lankford (R-Okla.), and Marco Rubio (R-Fla.) to safeguard people of faith from being legally compelled to violate their conscience. Instead, they substituted a legally ambiguous bipartisan amendment which critics say opens the floodgates for lawsuits against faithful business owners.

He became the second House Republican to have a change of heart over the controversial legislation. Rep. Scott Perry (R-Pa.) blamed the expedited vote for Republicans’ confusion and his former “yea” vote. House Speaker Nancy Pelosi (D-Calif.) gave congressmen just one day to review the consequential legislation. “We didn’t have a lot of information on it when they were calling for the vote,” said Perry last month.

“They jammed it through without any religious liberty protections,” agreed Rep. Chip Roy (R-Texas) on Monday’s “Washington Watch with Tony Perkins.” The amended bill only protects nonprofits from participating in the marriage ceremony itself, “not, for example, if you’re running an adoption organization, or maybe you’re a private Christian school. No, that’s not what they’re protecting, so it falls way short.”

“This [bill] actually destroys religious freedom … and that’s why they’re doing this,” Perry said. Without the strong religious freedom and conscience protections offered in the Senate, his fellow Republicans “absolutely must vote no,” he said.

It “will be a mistake for them if they vote for this. And I would encourage them absolutely not to do it.”

Their public renunciation of the bill “is a sign that the message is resonating and members understand that this [bill] is just unacceptable. They cannot support it,” Travis Weber, vice president for Policy and Government Affairs at Family Research Council, told Perkins on Monday.

Dozens of religious liberty watchdogs have warned that H.R. 8404 will usher in “a new era of oppression” for Christians. Even without the legislation, Christian bakers, florists, and website developers have faced potentially bankrupting legislation for refusing to participate in a same-sex marriage ceremony.

A growing chorus of conservative leaders are speaking out against the dire threat the bill poses to freedom of conscience and the ability of Christian entrepreneurs to stay in business. “If the Republicans who supported the redefinition of marriage in the Senate were thinking the public would forever hold their peace, they were wrong. Not only is the public speaking out, but so are other elected officials,” said Perkins.

Missouri Attorney General Jay Ashcroft called the bill “an abomination” on Monday’s “Washington Watch.” Ashcroft, the son of former U.S. Attorney General John Ashcroft, detailed the failures of the bill to retiring Senator Roy Blunt (R-Mo.), one of 12 Republican senators who voted for the bill. “RFMA will unleash the power and resources of the federal government on faith-based communities,” he wrote in a public letter addressed to Blunt.

Holding a vote now disrespects voters, who opted for more conservative leadership in the 2022 midterm elections, Ashcroft told Perkins. “After the people of this country have voted just less than a month ago to change the leadership of Congress, matters of this importance should not be taken up in a lame duck session,” he said.

The House plans to make a final vote on the amended bill this week, possibly as early as Tuesday. “We continue to make sure that it is beyond doubt clear in the minds of the members of Congress and all who are engaged in this debate and discussion that this bill has religious freedom problems,” Weber said.

Whatever the vote’s outcome, Perkins said, the debate has spurred Americans to consider the eternal order and design of marriage. “More and more people across the country understand that you can’t redefine what God created without consequences. And I believe we stand at a significant point in the history of this nation. We’re beginning to see all the consequences of rejecting truth,” Perkins concluded. “How do you fix that? You return to truth. You return to what God has said is right, and you reject what He says is wrong.”

The 47 House Republicans who voted for the “Respect for Marriage” Act in July are: