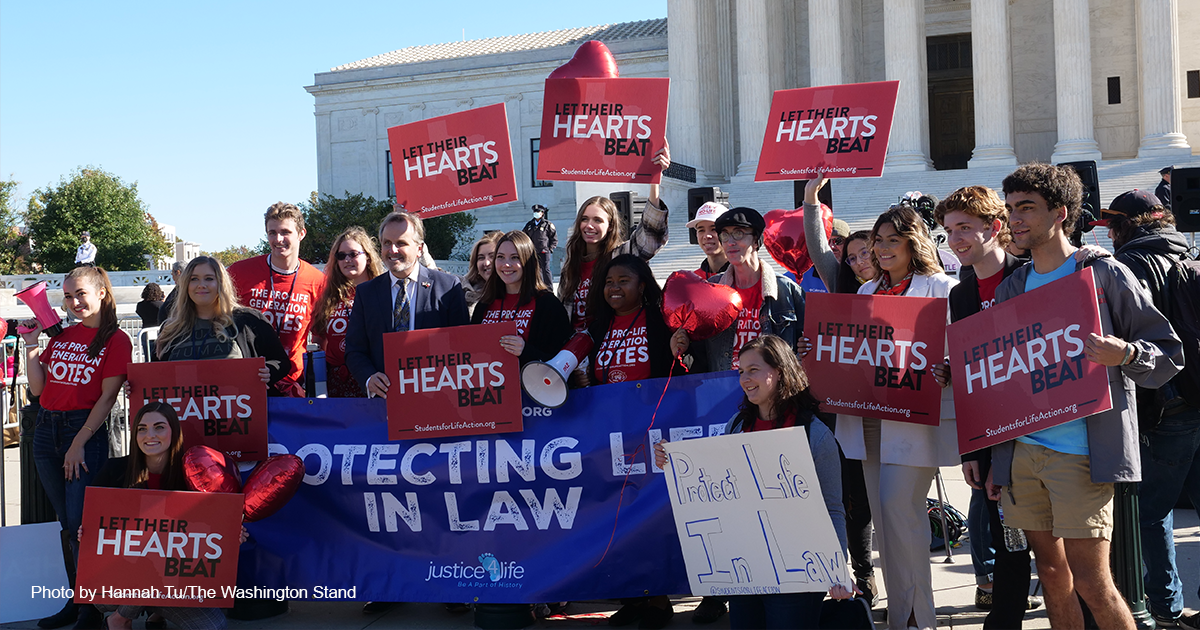 The Supreme Court’s decision to return the issue of abortion to the states has resulted in two new firsts: Many states held their first-ever marches for life, and the legacy media had their first opportunity to lie about them. One of the most egregious examples of media bias involved the Ohio March for Life. Thankfully, pro-life advocates can stave off this common media attack by using one word.

The state’s most-honored big market television channel, Columbus’s WBNS-10TV, prides itself on “honoring the hallmarks of quality, balanced journalism,” yet its report wrapped viewers in layers of yellow journalism. When a young pro-life advocate said she wanted to protect life “from womb to tomb,” correspondent Brittany Bailey’s report morphed into full-blown advocacy.

“We heard the phrase, ‘From womb to tomb’ more than once, so we dug deeper into that issue with organizers,” claimed Bailey. Then she asked the March for Life’s spokesperson: “What is your group doing to end the death penalty in our state?”

In many ways, 10TV executed a model media takedown, an art form of artifice and misdirection. It began with a strawman fallacy: Literally not a single speaker on the podium used the phrase “womb to tomb” (as you can verify from a full video of the event here), and Bailey’s footage showed only one of the hundreds of college students utter the phrase. Despite the dearth of evidence, the reporter presented that wording as the March for Life’s central belief, then raised the wizened “gotcha” of the death penalty. Bailey used this objection — which is older than she is, and certainly far older than 63.5 million of her fellow Americans ever got to be — to deliberately frame compassionate pro-life protections of the most innocent as hard-hearted hypocrisy.

But when pro-life marchers encounter this objection, they can turn it back with a single phrase.

The pro-life movement must add one word to our public statements: We advocate protecting all innocent life.

In the U.S., juries impose the death penalty on criminals guilty of the most heinous crimes (often slaughtering Christians), who spend an average of 22 years awaiting execution. Abortion takes the lives of the most morally unsullied human beings before they take their first breath — and Planned Parenthood sues if states want to make abortionists wait 24 hours.

If the stench of hypocrisy wafts over this issue, it clings to politicians such as Joe Biden, who favor abortion for the innocent and oppose the death penalty for the guilty. Candidate Biden’s campaign website vowed, “Biden will work to pass legislation to eliminate the death penalty at the federal level, and incentivize states to follow the federal government’s example.” Yet Biden promised if voters give him a Democratic majority in the midterm elections, his first act will be to sign a law striking down 1,381 pro-life protections and legalizing virtually all abortions until birth in all 50 states. Unfortunately, he is no anomaly: A Pew Research poll found 80% of registered Democrats support all or most abortions, while 53% oppose the death penalty for convicted criminals.

Perhaps Bailey can “dig deeper” during her next interview with Nan Whaley, the Democratic candidate for governor of Ohio, or with other powerful government officials who hold her positions.

Christians who want to dig deeper on capital punishment must begin by dispelling a common misconception: that the Ten Commandments say, “Thou shalt not kill.” The Hebrew traditionally translated “kill” is more properly rendered, “Thou shalt do no murder,” separating the taking of innocent life from that of the guilty. In the post-diluvian world God decreed, “Whoever sheds man’s blood, by man his blood shall be shed; for in the image of God He made man” (Genesis 9:6). In this passage, the Scripture ties executing the worst criminals to upholding human dignity. In the New Testament, the Apostle Paul wrote that the ruler “does not bear the sword in vain” (Romans 13:3-4) — which he certainly would if he never used it. Yet Jesus also warned against living by the sword (Matthew 26:51-52).

As a result, the Christian church has not traditionally held to any hard-and-fast, doctrinal position on capital punishment. Historical churches have canonized saints who imposed the death penalty alongside pacifists who refused to fight even in self-defense. Some Roman Catholics believe the death penalty violates a “consistent ethic of life,” while acknowledging that absolutism would create tension with its own history and dogmas. Most Roman Catholics, mainline Protestants, and some evangelicals oppose capital punishment, while Southern Baptists, traditional Lutherans, and most Christians generally uphold the death penalty. Many denominations give believers freedom to make a prudential judgment based on their own conscience. Even in the political realm, such bona fide conservatives as Richard Viguerie hold contrasting opinions on the issue. Ultimately, the propriety of the death penalty is an intrafaith debate for another day.

Compare that muddled view to the moral clarity of abortion.

The most persuasive case for the unborn’s right to life may come, not just from Christianity’s 2,000-year-long teaching that abortion is wrong, but from the mouths of abortion activists. The now-overturned Roe v. Wade admitted the Fourteenth Amendment prohibits any person from being deprived of “life, liberty, or property, without due process of law.” (So does the Fifth Amendment.) This reflects our Judeo-Christian belief that a ruler should be a terror to evil works and a praise to good. And there is none more innocent than the unborn. In the Roe opinion, Justice William Brennan wrote if the “suggestion” that “the fetus is a ‘person’ … is established,” the case for legal abortion “of course, collapses, for the fetus’ right to life would then be guaranteed.”

When speaking amongst themselves, scientists admit life begins at fertilization — a fact repeated in an endless array of embryology textbooks. (Bookmark this list.) Under civilized norms of justice, the innocent unborn person deserves legal protection. Yet “the unborn person doesn’t have constitutional rights,” as Hillary Clinton confessed in 2016.

It is precisely these most innocent members of the human family, whom unjust laws allow abortionists to execute without trial or offense, that the pro-life movement exists to protect. An unbroken line of believers have expanded the rights of the human family, from elevating women’s rights, pioneering religious liberty, abolishing slavery, and combating racial prejudice. Generations of spiritually active, government-engaged Christians, whom the media now denounce as “Christian nationalists,” have followed the biblical injunction, “Do not kill the innocent and righteous” (Exodus 23:7).

The sooner we have clarity about this, the better.