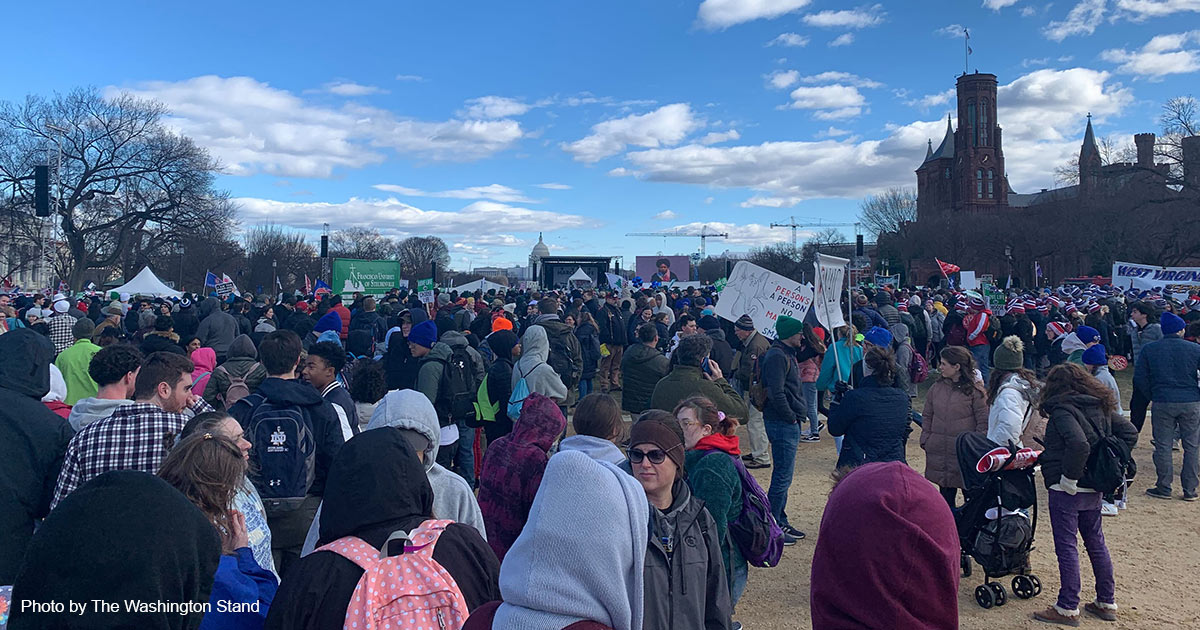 ‘Jesus,’ Tony Dungy Address ‘Building a Culture of Life in Post-Roe America’ at 2023 March for Life

Hundreds of thousands of pro-life advocates gathered in Washington, D.C., Friday as speakers at the 50th annual March for Life outlined “the next steps to building a culture of life in a post-Roe America.” The comprehensive vision includes national and state legislation, changing a dark and life-denying entertainment culture, and personally serving needy mothers and vulnerable children with no one to care for them.

He then hailed the real “Jesus Christ, the Author of life,” Whose “light has burned so very brightly inside each and every of you” called to “fight the noblest and worthiest cause possible, which is to allow the unborn the right to enter into the world and defeat those earthly forces that wish to destroy the very evidence of them.” He said that he prepared to portray the Son of God through “prayer, meditation, and the sacraments of my faith,” a process that “changes you … because you begin to see the truth manifest itself in all areas of your life, like a veil that has been lifted, and you can’t unsee what has been seen,” he said. “Satan is also real,” he added, and “he is not about to give up this fight, either.”

He challenged young people in attendance to “examine and expose the areas of darkness” in their communities and “change the culture by impacting the culture. Raise your voice. Vote with your resources.”

The rally took time to celebrate the most consequential change in its history by hearing from the attorney general of Mississippi, Lynn Fitch (R), who won the Dobbs decision. Rev. Franklin Graham thanked God for the political leaders who appointed a pro-life majority on the Supreme Court. “Father, we come today to say thank You for Donald J. Trump and Mike Pence, for nominating judges who believed in the sanctity of human life. Father, thank You. And Father, we thank You for Mitch McConnell and all the others in Congress who worked to get these judges confirmed,” Graham prayed in the benediction. “It wouldn’t have happened without Mike Pence; he was the driver behind a lot of it,” Graham told CBN News shortly afterwards.

Although the Supreme Court overturned Roe v. Wade last June 24 — the birthday of March for Life founder Nellie Gray — current March for Life President Jeanne Mancini reminded the teeming crowds that “the human rights abuse of abortion is far from over, sadly. This year in the U.S. we expect well over 700,000 abortions. And so, we continue to march until the human rights abuse of abortion is a thing of the past” by “building a culture of life in a post-Roe America.”

The choice of speakers implied this effort will require national and state legislation, valuing children conceived in difficult circumstances, and individually acting on our belief in science and faith to change the nation and the culture.

To build this culture, national lawmakers must enact protections for unborn children. House Majority Leader Steve Scalise (R-La.) pointed to two bills that passed the House of Representatives during its first week in session: a resolution condemning attacks on pro-life churches and nonprofits, and a bill punishing abortionists who let newborn babies delivered alive die without medical care. He noted that “80 different times, Nancy Pelosi blocked that bill from coming to the floor. … In just eight days of a Republican majority, we brought up that bill and passed it through the House of Representatives. That’s what difference an election makes.”

He urged marchers to contact Senate Majority Leader Chuck Schumer (D-N.Y.) to bring the bill to a vote on the Senate floor. “Life and death is at stake,” said Scalise, whose pro-life bon fides were attested by Rep. Chris Smith (R-N.J.), the chair of the Congressional Pro-life Caucus. “We have a great majority leader in Steve Scalise. The only reason those bills were voted on last week was Steve. Our leadership, Kevin McCarthy, they are all solidly pro-life,” said Smith.

Smith promised the House Republican majority “will do more and more” for the pro-life cause, hinting at the possible direction of legislation. “A new national debate on abortion has begun as lawmakers on the state level act quickly to protect children in the womb when a heartbeat can be detected at around six weeks or when the child suffers excruciating physical pain from the abortion procedure at 15 weeks,” he noted. “Unfortunately, the pro-abortion culture of denial — a modern-day flat earth society — continues to deny, devalue and disrespect unborn baby girls and boys and trivialize the harm suffered by women.”

“Future generations will someday look back on us and wonder how and why a society that bragged about its commitment to human rights could have legally sanctioned and aggressively promoted child beheadings, dismemberment, [and] chemical poisoning” of unborn children, Smith said. But thanks to Justice Samuel Alito’s “brilliant opinion” in Dobbs, Smith said, “we have an engraved invitation to protect life.”

The March for Life’s route symbolically represented the importance of national legislation protecting unborn children and expectant mothers. For decades, the march ended in front of the Supreme Court, often with a presentation by women who regretted their abortion. This year, marchers halted between the Supreme Court and the U.S. Capitol, implying that, while the court has overturned Roe, legislative action — and personally solving the issues that prevent mothers from choosing life — must follow.

When Dobbs overturned the Roe opinion — which Justice Ruth Bader Ginsburg considered legally indefensible — voters regained the right to protect life before the third trimester. State legislation will also prove pivotal, and it may include a diverse, bipartisan coalition. “The systemically racist abortion industry is being exposed,” enthused Connecticut State Rep. Trenee McGee, a pro-life Democrat who is black and female. “The younger generation of black, Latina, indigenous, and women of color are taking their rightful place to expose the mass genocide of our children,” McGee told the crowd, before turning her remarks against the abortion industry. “You’ve mocked and impoverished communities, all while putting clinics in them. You’ve told me I can’t be black and pro-life. … You have pocketed off the fear and pain or women and minors who don’t feel fit to parent. You’ve handed minors abortion pills in silence and told them not to tell their parents.”

“The aches and pains of rape, trafficking, and fear of mothering has made you rich,” she said. Planned Parenthood’s founders, Margaret Sanger and Alan Guttmacher, were confirmed eugenicists. “We resist the evil strategy to pluck us out like weeds,” said a defiant McGee, an apparent allusion to Sanger’s view that “human weeds” should not reproduce.

Pro-life medical staff, especially OB/GYNs, must also assure that women have an accurate understanding of pregnancy, conception, and abortion, including abortion-inducing pills. “We refuse to lie to our patients. We refuse to pretend that abortion is health care,” said Dr. Christina Francis, M.D., CEO-Elect of the American Association of Pro-Life Obstetricians and Gynecologists (AAPLOG). “The deliberate killing of a baby in abortion is never medically necessary.”

But many of the steps to build a culture of life will come down to the private actions of individual men and women, like former professional football coach Tony Dungy, who said he saw the March for Life as “way, way, way more important” than the NFL playoffs.

He contrasted the outpouring of prayer for Damar Hamlin, the Buffalo Bills player struck with a sudden cardiac event during a game in Cincinnati, with the unrecognized tragedy of abortion. “That game was canceled, because a life was at stake, and people wanted that life to be saved,” he related. “Every day in this country, innocent lives are at stake. The only difference is that [they] don’t belong to a famous athlete, and they’re not seen on TV. But those lives are still important to God.” Dungy then cited Psalm 139 before his wife, Lauren, shared their story of adopting eight children.

“It is love that will heal our culture and bring us together,” Tomes told the crowd.

A culture of life will also involve women who experienced abortions, who now tell those closest to them that they regret their decision. Summer Smith, the president of Students for Life at Liberty University, learned as a child that her mother had aborted her sibling out of fear and desperation. “I don’t want anyone to have to go through what my mother went through, and that is why I march today,” Smith said. “We have to support women in need now more than ever.”

Ending abortion will come only when society sees the inherent dignity of all children, as well. Sister Mary Casey of the Sisters of Life introduced her twin sister, Casey Gunning, who has Down syndrome. “I love my life!” said Gunning, a Special Olympics gold medalist. “I have Down syndrome, but Down syndrome does not define me. I’m defined by God. God put a price tag on every life, and He says we’re all priceless, born and unborn, disability or not.” She encouraged moms who had received a prenatal diagnosis that their child will be born with Down syndrome, “Your child will be a blessing to you and to the world, and you will be a perfect mom.”

Attendees went wild when introduced to a surprise guest, the daughter of a canonized Roman Catholic saint, St. Gianna Beretta Molla. The devout Catholic Molla knew her pregnancy threatened her life but chose to continue, dying shortly after she gave birth to her daughter, Gianna Emanuela Molla, who attended Friday’s event and received a special honor at Friday evening’s Rose Dinner. “The gift of life is truly the greatest, the most precious, and the most sacred gift, which we must honor, respect, and defend,” she said.

Some have tried to claim their faith requires or sanctions abortion — but they were rebuffed by Roumie. “God is love, and true love gives way to life, not death,” he said.

“As ones created in the image and likeness of God Who is Himself love, we are charged to be the standard bearers who defend and preserve the dignity of every human,” Roumie said, “but especially the most vulnerable.”