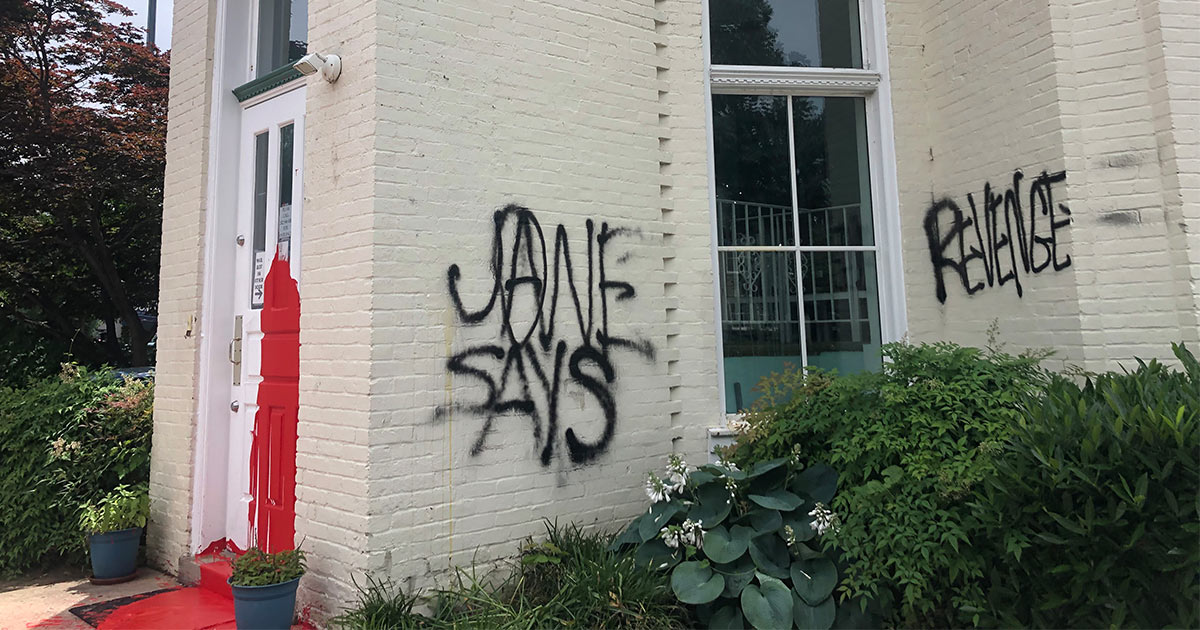 Dozens of congressmen have introduced a bill accusing the Biden administration of “dereliction of duty” after its nearly three-month-long investigation into abortion extremists’ crime spree against pregnancy resource centers (PRCs) has yet to yield a single known arrest.

“Pregnancy care centers across the country have suffered a surge of violent attacks, firebombing, and vandalism by pro-abortion activists in a coordinated effort to intimidate front-line volunteers and licensed medical professionals providing critical support to mothers in need and their unborn,” said Rep. Chris Smith (R-N.J.), who introduced the “Protect Pregnancy Care Centers” act on Monday.

He noted that attacks on life-affirming health care providers violate the “Freedom of Access to Clinic Entrances” (FACE) act, which President Bill Clinton signed in 1994 to restrict pro-life advocates and after significant lobbying from the abortion industry. The bill would require inspectors general of the Justice Department and the Department of Homeland Security to describe the number of investigations and its investigative methods — including whether it consulted with any outside groups such as, for example, Planned Parenthood or the Southern Poverty Law Center. It would also let pro-life centers know what federal grants may be available to them to rebuild.

It’s necessary to protect pro-life women’s centers to give women a full slate of options, advocates say. “Women deserve to have access to health care. They deserve [to know] that there are options available to them, and that abortion is not the only option,” Rep. Buddy Carter (R-Ga.), one of the bill’s 28 sponsors, told “Washington Watch with Tony Perkins” on Tuesday.

The highly accessible — and sometimes poorly defended — pro-life centers made a convenient target for pro-abortion vigilantes like Jane’s Revenge, which has claimed responsibility for acts up to and including lobbing Molotov cocktails into pregnancy resource centers during its “summer of rage.” The group declared “open season” on PRCs after the May 2 leak of the Supreme Court’s decision in Dobbs v. Jackson Women’s Health Organization, which overturned Roe v. Wade. It later promised to engage in “increasingly drastic measures” against pro-life centers unless they closed under duress.

A total of 10,215 licensed medical professionals serve women at PRCs — constituting roughly one out of every six individuals who works or volunteers at the centers. In all, the nation’s pro-life centers have saved an estimated 818,230 unborn children from abortion between 2016 and 2020, according to the pro-life Charlotte Lozier Institute.

The bill notes the pain and perseverance expressed by those victimized by abortion extremism. “My staff and I live on constant alert,” said the director of Alternatives Pregnancy Center in Sacramento. “We have been forced to expend valuable resources on these crucial safety measures, so we can continue to provide the women of our community with free medical care and services in the safest possible environment.”

The Justice Department announced a federal investigation into acts of violence and vandalism against pro-life pregnancy resource centers on June 24 but, thus far, it does not appear to have produced any results. “Our new bill takes President Biden to task for his dereliction of duty to protect these centers from domestic violent extremists and will help hold the Biden [a]dministration accountable for its obligation to prosecute those who are inflicting terror and destroying these vital resource centers,” said Smith. The bill’s other primary sponsor, Rep. Cathy McMorris Rodgers (R-Wash.), said “all extreme and hateful acts of violence should be condemned, which is why I’m helping lead this legislation to hold President Biden accountable for his failure to respond to this threat with the urgency it deserves.”

The legislation minces no words about who bears the blame for the DOJ’s stalled inquest.

“The Biden [a]dministration has failed to identify the threats, violence, and calls to violence against pregnancy centers as the work of domestic violent extremists,” notes the bill, which would express the sense of Congress that “the Department of Justice, which is responsible for investigating … and prosecuting the individuals threatening, vandalizing, and damaging pregnancy centers, has abdicated its duty and failed to provide justice for victims of violence.”

Multiple coalitions of congressmen and state attorneys general sent letters to Attorney General Merrick Garland on June 21, 24, 25, 27, and 28, asking for his attention to the ongoing anti-PRC assaults.

A report by a former counterintelligence official concluded that attacks against pro-life centers and churches “will become routine” without prosecution. The Religious Freedom Institute (RFI) report concluded that such serious crimes as armed attacks, arson with church members inside, and vehicular assault may “occur one to three times in the remaining months of 2022.”

But rather than seriously pursue the perpetrators, the administration and its political allies have created a hostile environment in which violence against PRCs flourishes, pro-life advocates say.

Biden delivered a darkly-lit address in Philadelphia warning of an alleged threat to democracy posed by a “MAGA force” who “are determined to take this country backwards — backwards to an America where there is no right to choose.” The speech’s text and subtext attempted to “dehumanize” Biden’s political opponents, including all pro-life advocates, Rep. Andy Biggs (R-Ariz.) told “Washington Watch” guest host Joseph Backholm at the time. Senator Elizabeth Warren (D-Mass.) has spent months accusing “fake clinics” of engaging in “torture” of “pregnant people,” in addition to introducing a bill that would fine pro-life pregnancy centers for spreading alleged disinformation.

“Her rhetoric, and her introducing this legislation, is what’s leading to these violent attacks by groups such as Jane’s Revenge on these pregnancy care centers,” Carter told Perkins.

“Now more than ever, we need to ensure the safety and security of the estimated 3,000 pregnancy care centers that provide life-affirming alternatives to abortion — offering critical, quality care for pregnant women facing challenging circumstances and helping to save so many unborn, innocent lives,” Smith concluded.