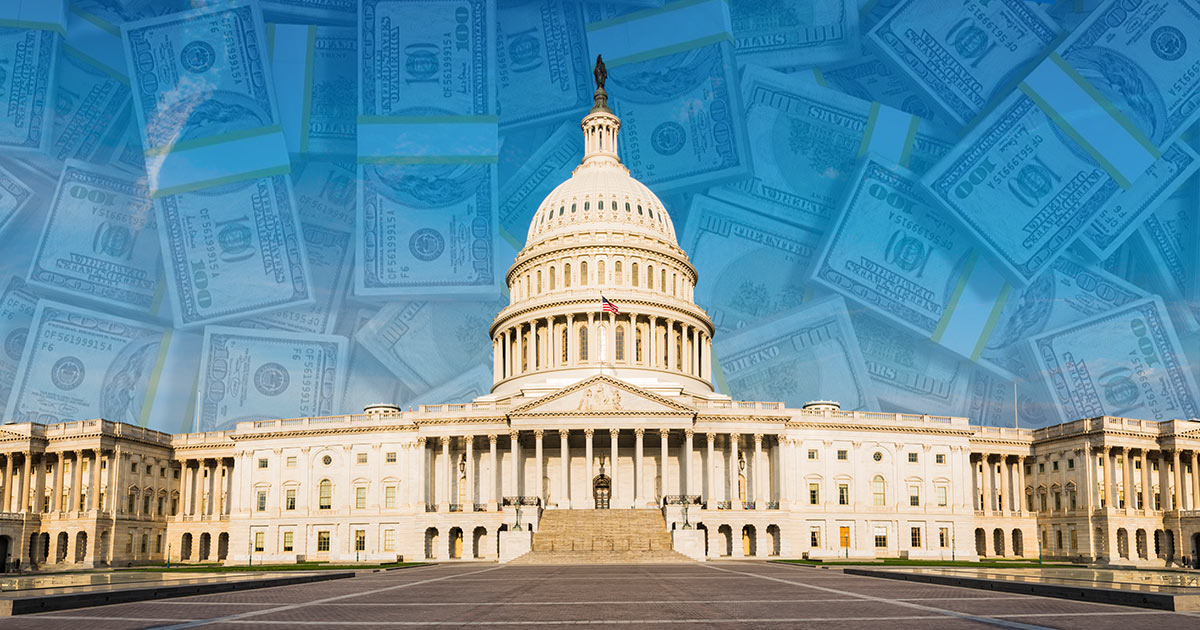 Congress has passed, and President Biden has now signed, a sweeping $1.65 trillion omnibus spending bill that gives millions of taxpayers’ dollars to LGBT pressure groups, causes veterans’ hospitals to commit abortions, and could compel the U.S. military and pro-life business people to facilitate abortion-on-demand. Democratic lawmakers call the last-minute bill, which locks in astronomical government spending levels for a year, “a great result,” but Republicans say its misplaced priorities and deficit spending represent “an egregious abuse of trust of the American people.”

Members of the House of Representatives had only three days to review the 4,155-page bill before voting to pass it by a 225-201 margin Friday afternoon. Ten Republicans voted in favor (see the list below) and one Democrat, Rep. Alexandria Ocasio-Cortez (D-N.Y.), voted against it. A reported 220 members voted by proxy after fleeing the Capitol early for the holiday season. The Senate signed off on the bill Thursday 68-29, with the support of 18 Republicans (listed below).

“Many members of the U.S. House and Senate patted themselves on the back that they’d beaten a winter storm bearing down on the country, but they failed to prepare for financial and moral storm that has descended on our nation,” Quena González, senior director of government affairs at the Family Research Council, told The Washington Stand. “Our elected representatives instead passed a $1.65 trillion budget with a reported $9.8 billion in pork-barrel earmarks, including more than $11 million in set-asides for LGBT advocacy and indoctrination of America’s children.”

Those grants attracted the attention of some members of Congress. “Why do you want to sexualize our children?” asked Rep. Lauren Boebert (R-Col.) on the House floor.

The bill’s passage infuriated Rep. Kevin McCarthy (R-Calif.), the leading candidate to become Speaker of the House in two weeks. He urged the Senate to pass a short-term government funding bill to avoid a shutdown and “wait 11 days” until the newly elected Republican majority takes control of the lower chamber. But Senate Majority Leader Mitch McConnell (R-Ky.), joined by a coalition of centrists and hawkish senators, threw their support behind the year-long bill because it boosts defense spending to $858 billion, a $69 billion increase over last year. (At least $20 billion will go directly to defense contractors, a major GOP donor group.) Democrats backed the bill because it throws $773 billion at liberal social spending, a $68 billion increase. The Democrat-controlled House Appropriations Committee celebrated the bill for spending the “highest level for nondefense funding ever.”

“Democrats are just reckless spenders on their crazy progressive leftist policies, but I didn't expect Republicans to partner with them,” Rep. Bob Good (R-Va.) told “Washington Watch” guest host Joseph Backholm. “This lame duck session is an egregious abuse of the trust of the American people who vote for Republicans in elections.” Good noted the bill contained earmarks, which “are how votes are purchased, to get folks to vote for legislation they may not totally agree with,” a form of bribery repeatedly condemned by the Bible.

“It has other loopholes for abortion through Veterans Affairs funding and elsewhere,” Travis Weber, vice president for policy and government affairs at the Family Research Council, told TWS. “This bill has a host of problems, aside from the process.”

Abortion figures prominently in the bill, including its inclusion of the full text of the “Pregnant Workers Fairness” Act, supported by Planned Parenthood and NARAL Pro-Choice America. Although PWFA was intended to protect pregnant women and new mothers from workplace discrimination, the bill requires employers to make reasonable accommodations for anyone experiencing “pregnancy, childbirth, or related medical conditions,” a term that could apply to abortions. It contains no exemption for religious organizations. Worse yet, the Senate rejected an amendment from Senator James Lankford (R-Okla.) to establish religious liberty exemptions. “The vague text of the PWFA could certainly provoke a number of lawsuits as it currently stands, aside from the general religious freedom issues this will raise for those who object to being complicit in facilitating abortion,” said Weber. “Senator Lankford, Chairman of the Senate Values Action Team, worked valiantly to ensure that the abortion mandate on employers would not impact religious employers,” added González.

Among the other concerns FRC raised about the bill, which it warned lawmakers it would score in its annual vote tally, it includes:

The omnibus may also increase federal arrests, investigations, or domestic surveillance of pro-life advocates. The FBI will receive more than half-a-billion dollars above the amount Biden requested, in part to further efforts “to investigate extremist violence and domestic terrorism.” An FBI briefing during the Obama-Biden administration listed “boycotts against abortion providers,” “picketing,” and “noise disturbance” as acts of “violence.” The omnibus also allocated more funds “to further support prosecutions related to the Jan. 6 attack on the Capitol and domestic terrorism cases,” while eliminating a bipartisan measure to research the origins of COVID-19.

Closing America’s porous borders became a flashpoint during the debate, when Senator Mike Lee (R-Utah) offered an amendment to preserve Title 42, which allows law enforcement to expel illegal immigrants in order to prevent COVID-19 spread. President Biden seeks to repeal the policy, one of the few effective border control policies maintained during an administration that has broken records for illegal immigration. Homeland Security Secretary Alejandro Mayorkas said in May that repealing Title 42 would cause up to 18,000 illegal border crossings every day.

The omnibus bill’s “increases” to border security funding fall far below inflation, effectively slashing the budget of agencies removing illegal aliens. It also stipulates that its funds can be spent only “to improve Border Patrol processing” of illegal immigrants, who are often then released into the American heartland, not to enhance detection and removal.

The bill did not revive Biden’s version of the Child Tax Credit, nor certain business tax incentives for investment, research and development.

“The longer you look at an omnibus, the worse it looks,” said González.

The gargantuan spending bill emerged in place of an orderly budget process, pressuring congressmen to vote for the bill or face a government shutdown. “Republican leadership in the House of Representatives, who refused to negotiate the $1.66 trillion Pelosi-Schumer budget for 2023, should insist on a return to regular order when they seat a Republican majority just a few days from now, on January 3,” said González. “The raid on the American taxpayer and the mortgaging of our children’s financial future must end.”

House conservatives have vowed to actively punish the Senate Republicans who went along with the high-spending, high-pressure omnibus bill, instead of allowing them to set a new budgetary framework in the new year. Reps. Chip Roy (R-Tex.), Scott Perry (R-Pa.), Andy Biggs (R-Ariz.), and 10 of their colleagues vowed to “oppose and whip opposition to any legislative priority of those senators who vote for this bill – including the Republican leader.” The 13 congressmen urged their Senate colleagues to “[k]ill this terrible bill or there is no point in pretending we are a united party, and we must prepare for a new political reality.”

In the end, bipartisan support for the omnibus bill “reveals that the Democrats are always Democrats, but many Republicans are really Democrats, as well,” said Rep. Good. “All Republican voters across the country ought to vote against every senator who voted to advance this legislation.”

The 10 Republican members of the House of Representatives for voted for the omnibus bill are:

The 18 Republican senators who voted for the omnibus bill are: