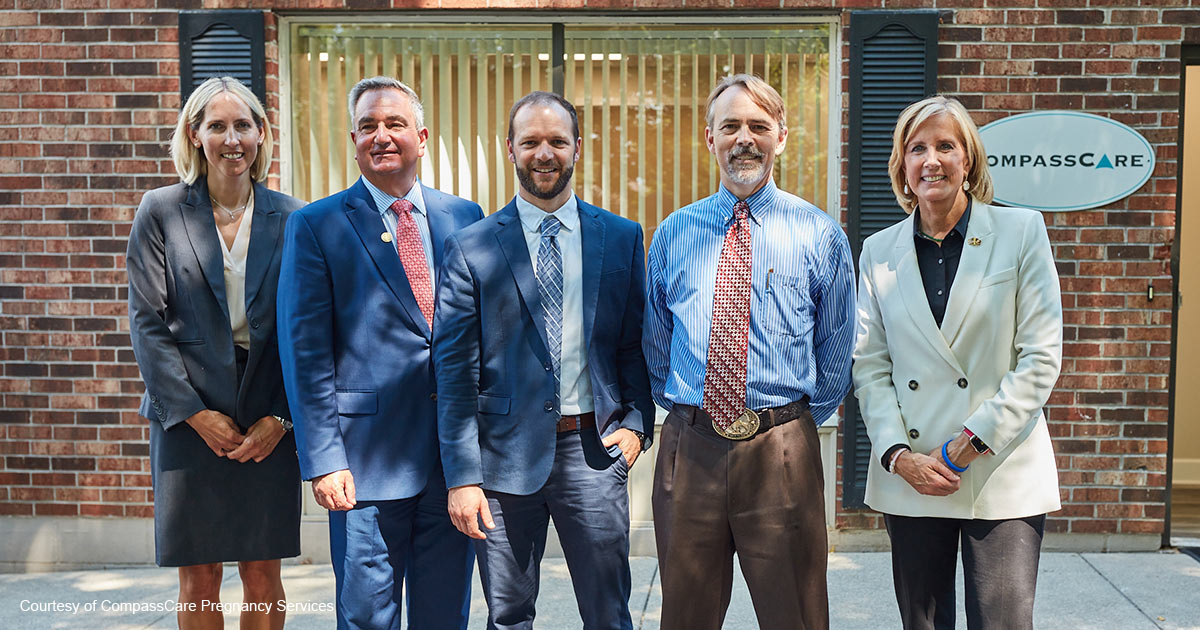 While election results remain uncertain, Rev. Jim Harden — who saw his Buffalo-area CompassCare firebombed by pro-abortion anarchists on June 7 — unveiled a legislative agenda for Congress the morning after the election. The 9-point plan to “Protect Women and Children from Abortion Fraud and Injury” calls on congressional leaders to investigate the abortion industry for medical malpractice, consumer fraud, and covering up sexual abuse/human trafficking, while reining in abortion practices that may have a negative impact on the environment. It also asks legislators to examine whether the Biden administration illegally colluded with Big Tech to stifle the rights of pro-life advocates — and whether Big Business discriminates against mothers who choose life.

“When we the people, permit government to dehumanize any class of people, like preborn babies, there is no length it will not go to safeguard the injustice,” Harden told The Washington Stand. “Women are injured. Children are destroyed. Civil order is sacrificed.”

Perhaps the most explosive — and legally devastating — aspect of the plan calls on investigators to probe into the abortion industry’s long and deplorable history of lying about sexual abuse and covering up human trafficking. Court documents frequently cite Planned Parenthood for failing to report suspected child abuse to the authorities, as required by law — effectively facilitating rape, incest, and sexual slavery of minors and adults alike. The 9-point plan appeals for federal investigators to undertake a nationwide study which will protect the identities of victims while “correlating age of the girl, state of residence, place of abortion, and whether the incident was reported to law enforcement per federal and state law.”

“Since there is no statute of limitations on the prosecution of sex crimes, an assessment of sex crime cover-ups can be deduced and criminal prosecution pursued,” the plan notes.

Much of the plan focuses on protecting mothers from the potentially life-threatening harms of so-called medical or chemical abortion. While its advocates call the regimen of misoprostol and mifepristone “safer than Tylenol,” abortion-related emergency room visits increased 500% between 2002 and 2015, in tandem with the radical expansion of chemical abortion.

The Biden administration aided the spread of chemical abortions by removing requirements for abortionists to hold an in-person medical examination with a patient before distributing the two-drug abortion cocktail. Now the drugs are “illegally mailed to women from foreign countries and across state lines as the Biden administration demands pharmacists dispense the medication in direct contravention of states’ rights,” the plan states.

A personal examination is necessary for the doctor to verify the woman is not suffering from an ectopic pregnancy. Women suffering side effects from these drugs are also encouraged to hide the fact that they have ingested these drugs, introducing the possibility of medical complications. “The fast-emerging chemical abortion industry ought to be investigated for serial medical malpractice” and consumer fraud “for unethical processes endangering a woman’s health for profit,” the plan states.

CompassCare uniquely asks lawmakers to consider the environmental impact of chemical abortions. In a medical abortion, a woman miscarries at home and is often encouraged to flush the unborn child down the toilet — into the public water supply. It is known that birth control pills have raised the estrogen levels of public waterways, creating fish who are “intersex” and imposing unknown impacts on human consumers. CompassCare asks officials to scientifically assess the effect of greatly increasing the amount of human biological waste being flushed into America’s water supply due to medical abortions.

Big corporations that “pay for abortion and abortion-related travel expense” for employees while offering nothing to mothers who choose to have their babies may be violating the Pregnancy Discrimination Act. And the Biden administration may be guilty of colluding with “other government actors, big tech, and pro-abortion extremists” to “deprive pro-life citizens of freedom of speech (1st amendment), equal protection under the law (14th amendment),” it states, requesting a deeper investigation.

The “activities of radical abortion extremist factions in the government, law enforcement,” big corporations, “and embedded terror networks are demonstrating extreme prejudice against pro-life beliefs and public activity, to the detriment of women and children,” the CompassCare report summarizes.

The plan asks lawmakers to repeal the 1994 Freedom of Access to Clinic Entrances (FACE) Act, which putatively protects pro-life PRCs alongside abortion facilities but “is currently being used to leverage federal law enforcement to target only pro-life activity.” Though a recent study found that pro-life organizations are 22.5 times more likely to suffer violence than abortion business offices, the Biden administration has yet to announce a single arrest in the long list of attacks on pro-life pregnancy care centers since the leak of the Supreme Court decision on May 2 — much less any “SWAT-like raids on homes of pro-abortion extremists.” Biden’s Justice Department has announced multiple arrests in the six attacks against abortion facilities during the same period, while raiding the homes of nonviolent pro-life advocates.

The most important step pro-life lawmakers can make is to “recognize the personhood of all humans,” the plan states, protecting the God-given rights secured by the Founding Fathers in the U.S. Constitution and Bill of Rights.

The policy document will find a hostile reception from the president, who said at a post-midterms press conference Wednesday that he would veto any pro-life legislation, “but I’m ready to compromise with the Republicans where it makes sense, on many other issues.” Yet it may be welcomed by Rep. Kevin McCarthy (R-Calif.) and other Republican leaders who adopted the “Commitment to America,” which pledged to “protect the lives of unborn children.”

CompassCare would like to leave the law to others, secure in the knowledge that its pantry contains food and diapers for the needy, not a bomb from Jane’s Revenge. “Ultimately, we would like to get back to the mission of providing for the unmet health and resource needs of women and their babies.”

The plan reads in its entirety:

1. Repeal the FACE Act: Since the Supreme Court in Dobbs v. Jackson did not find abortion as protected under the 14th amendment, the FACE Act is now moot. Further, it was originally designed and is currently being used to leverage federal law enforcement to target only pro-life activity, trampling the 1st Amendment rights of pro-life people. After over 150 actual FACE Act violations against pro-life pregnancy centers, organizations, and churches there have been no arrests or SWAT-like raids on homes of pro-abortion extremists.

2. Examine to Indict for Violations of USC 1983: Determine if the actions of government actors to conspire with other government actors, big tech, and pro-abortion extremists to defame, shut down, censor, threaten, or otherwise destroy the person or property of pro-life people and organizations represent a conspiracy to deprive pro-life citizens of freedom of speech (1st amendment), equal protection under the law (14th Amendment), or any other civil right explicitly stated under the Constitution or implicit in the human condition (9th Amendment).

3. Investigate Chemical Abortion Serial Medical Malpractice: It is a denial of any patient’s autonomy for a medical practitioner to fail to diagnose a patient’s condition, prescribe treatment for an undiagnosed condition, withhold informed consent for the suggested treatment option, suggest or facilitate the illicit delivery of that treatment and then fail to provide continuity of care. The fast-emerging chemical abortion industry ought to be investigated for serial medical malpractice for unethical processes endangering a woman’s health for profit by masquerading as legitimate medical providers. It has also been observed that if complications to chemical abortion occur, women are being told to go to their local emergency department and tell them they are experiencing a miscarriage without mentioning the Misoprostol in the woman’s system.

4. Investigate Chemical Abortion Consumer Fraud: The abortion industry has been emboldened by the federal government’s refusal to enforce laws regarding the sale and distribution of chemical abortions. This has emboldened consumer fraud to such an extent that some online businesses are brazen enough to peddle these dangerous drugs, hazardous enough to be listed on the FDA REMS list, touting them as “safer than Tylenol.” Further, the illegal sale of these drugs to minors online and without parental consent should be investigated.

5. Pressure Other States and Nations to Stop Illegal Sale and Shipment of Abortion Drugs: The extent of trafficking of controlled substances like Misoprostol internationally and across state lines ignoring both Federal and state law should be assessed, and a mitigation strategy developed and implemented.

6. Abortion Industry Sex Crime Cover-up: Whistleblowers from the global abortion business Planned Parenthood have come forward with information demonstrating serial sex crime cover-ups for both victims of sex trafficking and sexual abuse of minors. A recent FBI whistleblower also noted de-prioritization of child sex abuse investigations in favor of “politically motivated cases fraudulently labeled ‘Domestic Violent Extremism’ in order to ‘fit a political narrative.’” A comprehensive, deidentified review of all minors provided with an abortion by all U.S. abortionists should be conducted, correlating age of the girl, state of residence, place of abortion, and whether the incident was reported to law enforcement per federal and state law. Since there is no statute of limitations on the prosecution of sex crimes, an assessment of sex crime cover-ups can be deduced and criminal prosecution pursued affording women the full protection of the law.