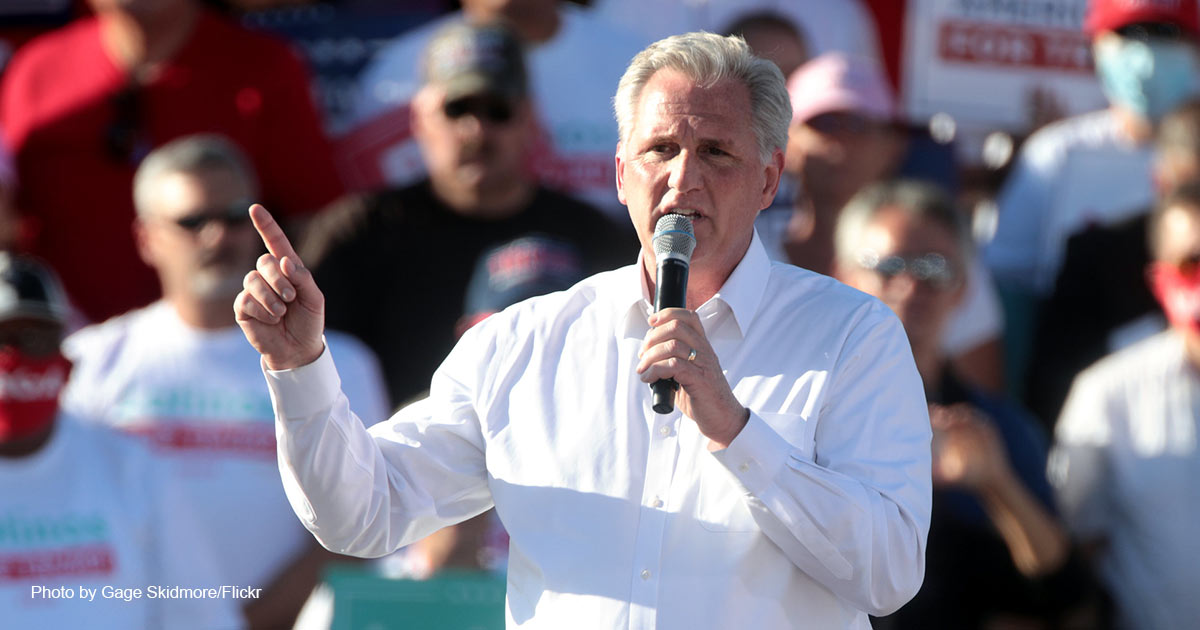 ‘We Are Going to Give the Power Back to Parents’: Republicans Unveil ‘Commitment to America’ Agenda

Voters pleaded with Republican leaders to protect parental rights, children’s modesty, and religious liberty as the GOP unveiled its “Commitment to America” midterm agenda on Friday morning — asking would-be Speaker of the House Kevin McCarthy (R-Calif.) to make America “godly” and become “the party of parents.”

House Republican leaders opted to nationalize the 2022 midterm elections with a platform emphasizing economic prosperity, national and border security, protecting constitutionally guaranteed rights, and holding the Biden administration accountable for the multiplying cloud of scandals emanating from the Oval Office.

The GOP chose to launch its four-pronged agenda at a steel manufacturing facility in suburban Pittsburgh, because “we wanted to get into real America, away from the bubble of Washington, and talk about the issues that people care about,” House Minority Whip Steve Scalise (R-La.) told “Washington Watch with Tony Perkins” on Friday evening. Rather than campaign against the current administration’s policies, “we wanted to show the country what we're for — to lay out a bold, conservative vision.”

The voters of western Pennsylvania also brought their concerns about the nation’s political, and spiritual, direction during a question-and-answer session. “My heart tells me that this country will never be great again until we make it godly again,” said Reverend James Nelson, the African-American pastor of New Birth Ministries in Duquesne, Pennsylvania. “As a Christian with the freedom of speech, I was invited to pray at the state capitol but cautioned not to mention the name of Jesus.” Before he retired as a police officer (“because God got me through”), he “had to arrest United States citizens for illegally entering a building and release non-citizens who illegally entered my country.”

Others shared their concerns about the left-wing values public school seek to instill in their children. A parent who identified herself as Lori McRoberts, and called herself a “mama bear,” recounted criticizing COVID-19 school policies of “masking our children for over seven hours a day, virtual learning, missing weeks of school because of contact tracing.” Children of all ages “sat like prisoners during lunch, all facing in one direction with no talking, because talking could spread COVID.”

That was followed by “the slow creep of critical race theory; diversity, equity, and inclusion; gender identity, and allowing biological boys to enter girls’ spaces in sports. Now we have social emotional learning. It’s indoctrination,” she said. “These are all Marxist-style programs targeting our children.”

“Our children were being used as political pawns,” she said. “Then, the current administration weaponized the Department of Justice, and all the parents speaking up a school board meetings challenging these programs were now labeled domestic terrorists.”

“Will the Republican Party be the party of parents?” she asked.

“We are going to give the power back to parents,” replied Rep. Julia Letlow (R-La.). McCarthy highlighted the agenda’s support for a “Parents Bill of Rights, parental choice, and we believe in fairness: We should ensure women only compete in women’s sports.”

The GOP’s agenda drew plaudits from those concerned about the right to life, which was “rightly included the acknowledgement that protecting preborn life should be included in efforts to ‘preserve our constitutional freedoms,’” said Students for Life Action President Kristan Hawkins. “We are in a winning moment in the pro-life movement as we are now discussing not whether to protect life but how soon,” she continued. “Polling indicates that — whether protecting life when a baby has a measurable heartbeat or at almost four months of pregnancy (15 weeks) — limited abortion appeals to the majority of Americans.”

The Republican agenda also drew criticism from the president and Democratic Party leaders. Biden offered a cryptic critique of the Republican plan on Thursday, saying he would not “go through the whole thing ... You’ve got to figure it out. It’s a very different, different view. A very different view.” On Friday, House Speaker Nancy Pelosi (D-Calif.) denounced the “alarming new extreme MAGA platform,” which “threatens to criminalize women’s health care” and is “far too dangerous — for our families and for our Democracy [sic].”

“Of course, she wants abortion-on-demand up until birth, paid for by taxpayers. That’s the extreme position,” Scalise told Perkins on Friday. “That’s what we’re fighting against.” Rep. Warren Davidson (R-Ohio) agreed when he previewed the agenda on “Washington Watch” Thursday afternoon. “They want unlimited, unfiltered, unrestrained abortion, and that’s not where the American people are,” he said. Polls show a majority of Americans oppose funding abortion in the United States, and 74% of Americans oppose funding abortion overseas — both policies championed by Democratic leaders.

While McCarthy has touted the “Commitment to America” — the same name Republican congressional leaders gave their 2020 campaign agenda — it differs from the 1994 “Contract with America” in its length and specificity. Newt Gingrich’s plan, which listed eight planks and 10 specific bills Republicans would enact if they took the majority, powered the Republican Party into a House majority for the first time since 1952. Perkins asked Scalise to respond to criticisms that the Commitment to America’s priorities “are overly general and lack any specific policy plans.”

Scalise noted that he offered specific legislation each week on the House floor and specified the bills House leaders would advance in his weekly debates with House Majority Whip Steny Hoyer (D-Md.). Without control of the White House, much of the coming two years would see congressional Republicans holding the line against the Biden administration until the 2024 presidential election — something Scalise feels is necessary to preserve opportunity for generations of Americans, born and unborn.

“If we keep going down this path of socialism, and trillions of dollars of spending and taxes and doubling the IRS, will America still be that land of opportunity? Will people still have the same chance at the American dream tomorrow, or 10 years from now, as we do today?” asked Scalise. “That's going to be on the ballot this November.”