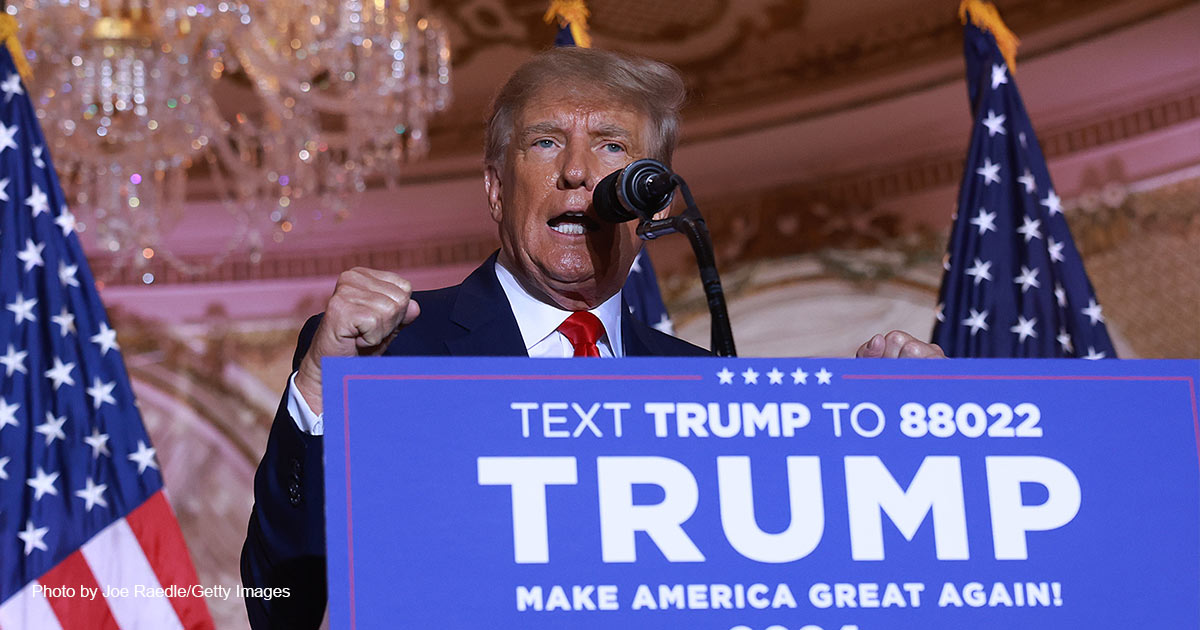 “America’s comeback starts right now,” former President Donald Trump told hundreds of cheering supporters at his Mar-a-Lago residence Tuesday night, as he announced he will run for a second term as president of the United States. Trump asked for prayer as he vowed to protect parental rights, prevent males from competing in women’s sports, and “defend life” in an hour-long speech that proved light on specific policies on social issues.

“We will not let men, as an example, participate in women’s sports,” Trump said, calling the innate physical differences between the sexes “very unfair” in competition. “We will defend the family as the center of American life,” and “we will defend parental rights,” Trump added, saying he could never imagine parental rights stirring controversy “10 years ago, 15 years ago.”

Trump made, at most, one glancing reference to abortion. “We will defend life, liberty, and the pursuit of happiness,” he said, without elaborating any policy agenda after the Supreme Court’s landmark Dobbs decision — an omission not missed by national pro-life leaders.

“As spiritually active, governance-engaged conservatives, we judge candidates based on the issues, not personalities. We look forward to a full and robust debate over life and family among all the candidates who enter the race,” Family Research Council President Tony Perkins told The Washington Stand.

“The pro-life movement … is not drawn to any one political party or any one person; we take a principled stand on the human rights issue of our day,” said Students for Life Action President Kristan Hawkins. The pro-life “vote will need to be earned.”

SBA Pro-life America acknowledged that “President Trump raised the bar for what it means to be a pro-life presidential candidate,” including his historic decision to publish a list of potential Supreme Court nominees in 2016. In a series of social media messages, it called on him to rise to the challenge again in 2024.

“We’re encouraging him, and all presidential contenders, to outline their pro-life vision and policy platform in the new Dobbs era,” the group said. “The pro-life movement needs a presidential nominee in 2024 who will advocate for national minimum protections for unborn children centered around when the baby can feel pain or when the baby’s heartbeat can be detected.”

Asserting that “abortion is an issue solely for the states to decide” is “an unacceptable position for any 2024 GOP presidential contender,” the group stated.

The remainder of Trump’s speech outlined an expansive agenda to restore “glory to America” and regain “American greatness,” while fighting “globalist sell-outs.”

He strongly contrasted the Biden administration — “a time of pain, hardship, anxiety, and despair” — with his record-breaking economic successes. “We are here tonight to declare that it does not have to be this way. Two years ago, we were a great nation, and we will be a great nation again,” he said.

“The decline of America is being forced upon us by Biden and the radical left lunatics running our government,” he charged. “This decline is not a fate we must accept.”

“Unlike other presidents, I kept my promises,” he boasted. Biden, who backtracked on two of his defining midterm promises to codify Roe and bailout student loan holders, responded by tweeting, “Donald Trump failed America.”

Trump then promised a series of reforms to maintain “peace through strength,” secure the southern border, root out corruption within the U.S. government, and reach new heights of American strength.

He vowed to “abolish every Biden COVID mandate and rehire every patriot who was fired from our military with an apology and full backpay,” he said. “As commander-in-chief, I will get Biden’s radical ideology out of our military,” he added. He promised to establish a missile defense shield and “keep America out of foolish and unnecessary foreign wars.”

On the border, a second Trump administration will “wage war on the cartels and human traffickers,” as well as MS-13 “savages.” He promised to end the catch-and-release policies that marked the Biden, Obama, and Clinton administrations and reinstate his Remain in Mexico policy, which Biden repealed.

Trump, who suffered the sustained opposition of the permanent bureaucracy embedded in national security apparatus, promised to “dismantle the Deep State,” “clean out the festering rot of Washington, D.C.,” and “return governance to We the People,” as the crowd chanted “Drain the Swamp!”

The president also promised to end congressional abuses of power by ending congressmen trading stocks based on inside information, supporting a constitutional amendment establishing term limits, imposing a lifetime ban on lobbying by former congressmen, and banning taxpayer funding of political campaigns,

Predictably, he pivoted to election security, saying, “I will immediately demand Voter ID, same-day voting, and only paper ballots,” Trump said. “And we want all votes counted by election night.” He may have difficulty delivering on these promises, since the Constitution leaves election procedures up to the states.

The litany of issues wounded down with Trump’s intention to “end the scourge of homelessness that is plaguing our beleaguered, Democrat-run cities” and to “plant our beautiful American flag very soon on the surface of Mars.”

“The journey ahead of us will not be easy,” admitted Trump, never one given to modest expectations. “We will be resisted by the combined forces of the Establishment, the media, the special interests, the globalists, the Marxist radicals, the Woke corporations, the weaponized power of the federal government, the colossal political machines, the tidal wave of dark money, and the most dangerous domestic censorship system ever created by man,” Trump warned. Such a herculean undertaking is “not a task for a politician or a conventional candidate.” While he and his supporters “will be attacked” and “slandered … we will not be intimidated. We will persevere.”

“We will stand tall in the storm,” promised Trump. “We will march forward into the torrent and we, in the end, we will win. Our country will win.”

In addition to soliciting Americans’ votes, he also requested their intercessions. “I am asking for your friendship and prayers on this very incredible but dangerous journey,” he told the crowd. “America’s golden age is just ahead,” Trump forecasted, before working toward his rousing signature conclusion: “We will make American great again.”

Although Trump became the first to throw his red MAGA hat into the ring, he will almost certainly face other Republican presidential hopefuls. Florida Governor Ron DeSantis, whose 20-point landslide provided the GOP’s clearest success during last Tuesday’s midterms, seemingly alluded to a primary challenge in his victory speech. “We have rewritten the political map,” he said as some supporters chanted, “Two more years!”

“We welcome any and all authentically pro-life candidates into the ring,” said Hawkins. “This generation is not looking for platitudes or show votes, but functional limits, real protections, help for mothers and children, and ultimately an end to abortion as a human rights atrocity our nation will look back on with regret.”

The first contest of the 2024 presidential primary, the Iowa caucuses, takes place in 14 months, in January 2024.