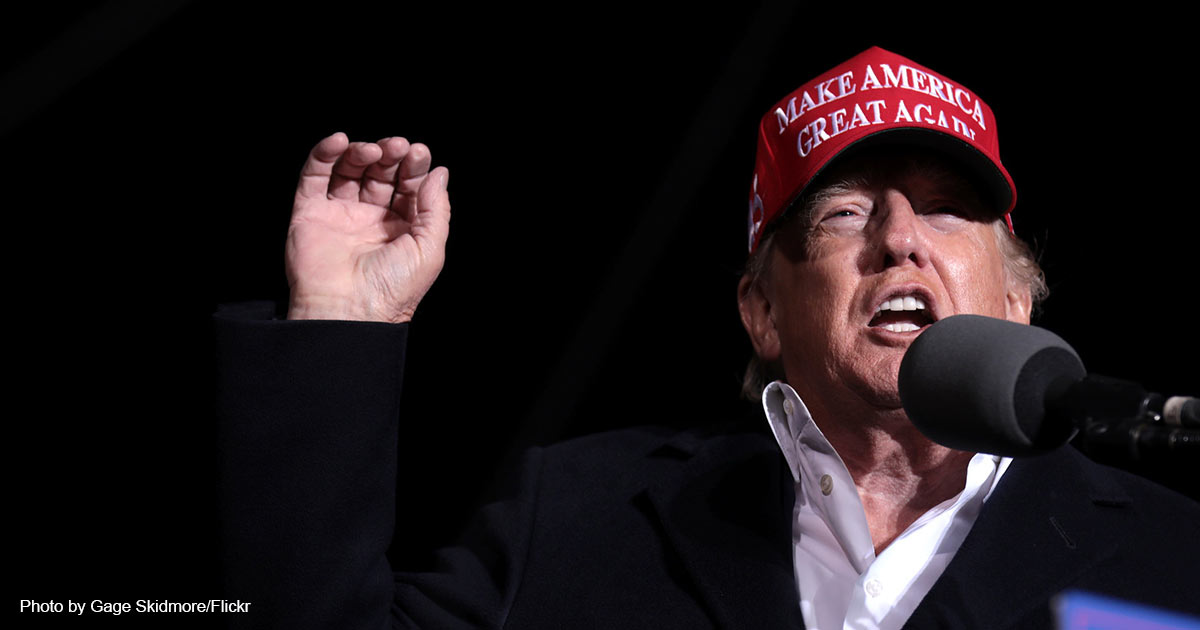 Former President Donald Trump attempted to blame the disappointing outcome of the 2022 midterm elections on pro-life advocates who refuse to compromise their principles, a move critics called opportunistic, factually challenged, and “very dumb.”

“It wasn’t my fault that the Republicans didn’t live up to expectations in the MidTerms [sic],” wrote the 45th president in a message posted to Truth Social on New Year’s Day. “It was the ‘abortion issue,’ poorly handled by many Republicans, especially those that firmly insisted on No Exceptions, even in the case of Rape, Incest, or Life of the Mother, that lost large numbers of voters.”

Pro-life leaders faulted the Republican Party for not having ready answers to predictable Democratic attacks after the Supreme Court’s Dobbs decision, which overturned the Roe v. Wade decision. “The approach to winning on abortion in federal races, proven for a decade is this: state clearly the ambitious consensus pro-life position and contrast that with the extreme view of Democrat opponents,” said Marjorie Dannenfelser, president of Susan B. Anthony Pro-Life America, which spent $78 million and contacted eight million swing-state voters in its efforts to elect pro-life candidates in the 2022 midterm elections. “We look forward to hearing that position fully articulated by Mr. Trump and all presidential candidates.”

“There was also a profound midterm lesson for future federal candidates,” added Dannenfelser. “Those who adopted the Ostrich Strategy on abortion lose.”

In the first 50 days after the reversal of Roe, Democrats outspent Republicans on targeted abortion ads by a factor of eight-to-one, according to data from AdImpact. Democrats spent $31.9 million to Republicans’ $4.2 million. By the general election, Democratic spending on abortion-focused advertising morphed to $450 million, compared to a meager $10 million from Republicans. “In the closest Senate and governor’s contests, Republicans have spent virtually nothing countering the Democratic offensive,” reported The New York Times in August.

Critics also took apart Trump’s assertion that pro-life candidates had staked out an extreme stance on abortion. “Literally zero Republican candidates think abortion should be banned when a mother's life is at risk” — an erroneous claim often made by Democrats — noted Spectator editor-at-large Ben Domenech. Trump campaigned on changing the Republican Party platform to include “the three exceptions” — rape, incest, and to save the life of the mother — in 2016, although no changes were made.

Abortions due to rape and incest accounted for less than 1.5% of all abortions carried out in the United States, according to a survey from the Guttmacher Institute, a former affiliate of Planned Parenthood.

Trump also claimed complacent pro-life voters did not turn out for the midterm elections, where the anticipated “red wave” failed to materialize. “The people that pushed so hard, for decades, against abortion, got their wish from the U.S. Supreme Court, & just plain disappeared, not to be seen again,” he wrote. In reality, GOP “turnout was sky high, but Republicans didn’t vote for every Republican candidate,” Republican National Committee Chair Ronna McDaniel told radio host John Catsimatidis.

Trump attempted to deflect a torrent of blame from the president’s critics in both parties, who pinned the GOP’s failure to recapture the Senate on his mediocre track record of endorsements. While Trump boasted his track record of midterm endorsements was “233-20,” he backed many incumbents or nominees in safe Republican seats. Trump-endorsed candidates won only 16 of the 41 battleground races, for a success rate of 39%, according to an analysis from Ballotpedia. In November, candidates whom Trump selected in the primaries underperformed other Republicans by approximately five percentage points, according to The New York Times.

The “GOP has lost control of the Senate THREE cycles in a row & it was not the fault of the pro-life movement,” Speaker of the Texas House of Representatives, Rep. Dade Phelan (R), addressed Trump on Twitter. “It was your hand picked candidates who underperformed & lost ‘bigly’. May 2023-24 bring the GOP new leadership PROUD to protect the unborn.” Phelan touted the Texas Human Life Protection Act of 2021, which protects all children except to save the mother’s life or prevent the “substantial impairment of a major bodily function.” Governor Greg Abbott (R), who signed the bill, also coasted to reelection in 2022.

Trump also blamed Senate Majority Leader Mitch McConnell (R-Ky.), whom he described as “stupid” before using a profane term. McConnell shifted campaign funds away from Republican Senate candidates Blake Masters in Arizona, Don Bolduc in New Hampshire, and Kelly Tshibaka of Alaska, because they said they would not support his reelection to Senate leadership. McConnell complained Trump’s intervention in the 2022 election undermined “our ability to control primary outcomes.”

Others faulted congressional Republicans for failing to produce a meaningful platform before the midterms. Senate Republicans “offered no plan, no agenda, no hint of what they [would] do. In fact, in the Senate they bragged about not having such a thing,” according to Heritage Action for America. That, “coupled with their failure to adequately combat the Left’s dishonest messaging on abortion,” cost the GOP its chance to regain the majority in the formerly 50-50 Senate.

Trump’s latest post contradicts previous Trump statements denying that he felt disappointed by the 2022 midterm election results and taking credit for the lifesaving Dobbs decision. “For those many people that are being fed the fake narrative from the corrupt media that I am Angry about the Midterms, don’t believe it. I am not at all angry, did a great job,” Trump posted on Truth Social two days after the November election.

Not all commentators pushed back against Trump’s blame-shifting tweet. Twitter owner Elon Musk rated Trump’s post-election analysis “mostly accurate, tbh.” But Domenech emphasized “how stupid it is for Trump to run left on the pro-life issue. This is the biggest win of his presidency.”

Siding against the Republican Party’s pro-life base, Domenech added, is “very dumb.”