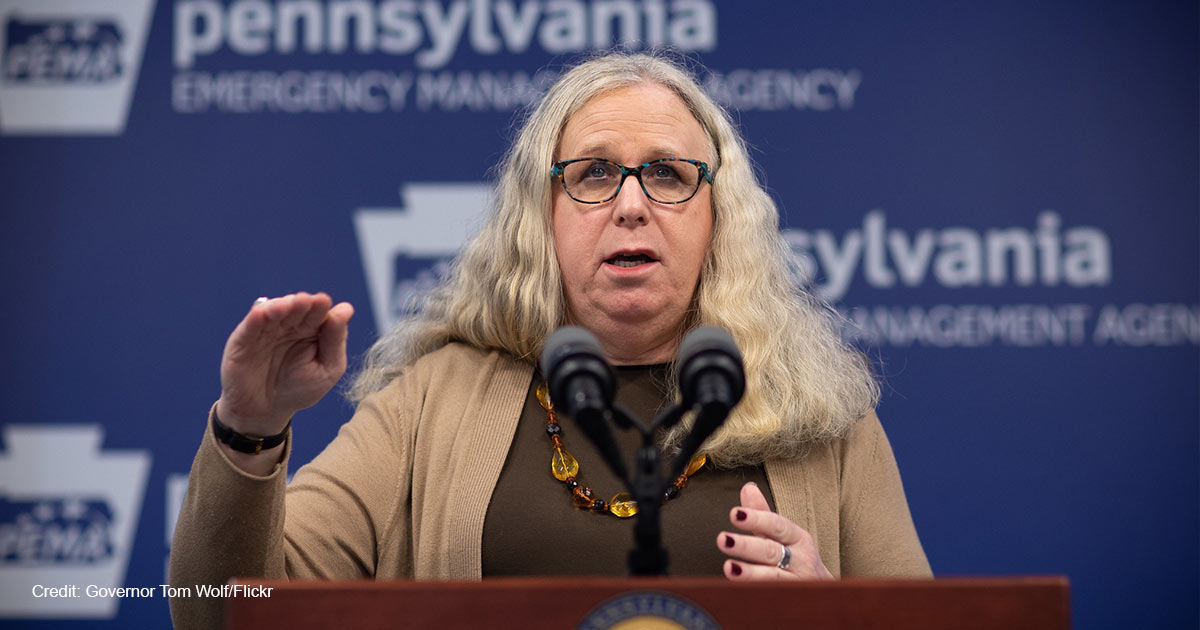 ‘Medicine and Science Are Being Politically Perverted’ to Oppose Trans Procedures: Biden Official

The transgender-identifying individual who serves as the Biden administration’s assistant secretary for health has warned that “medicine and science are being politically perverted” by those who oppose transgender procedures for minors, telling medical professionals to question whether parents are truly motivated by “care and compassion” when they seek to protect their children from the transgender industry.

The official, who now goes by the name Rachel Levine but was born Richard, told doctors to use their position to push back against parents and others who oppose subjecting minors to life-altering surgeries or lifelong hormone injections. “I encourage all of you to think of yourself as ambassadors to your communities, ambassadors for science,” Levine told the Pediatric Grand Rounds at the University of Pittsburgh on September 22, in a clip that recently resurfaced on social media.

“I believe in our role as truth-tellers, and the truth that we need to confront now is that medicine and science are being politically perverted around this country,” said Levine. “This destroys human lives, and we have reached a tipping point for the role of medicine in civic life for the health and well-being of LGBTQI+ youth and other Americans.”

“Those who attack our community are driven by an agenda of politics. … It has nothing to do with warmth, empathy, compassion, or understanding,” Levine inveighed, accusing his opponents of “rejecting well-established science, and simply rejecting basic human compassion.”

A Swedish study found that people with gender dysphoria “after sex reassignment, have considerably higher risks for mortality, suicidal behavior, and psychiatric morbidity than the general population.”

Medical experts say Levine has turned the facts of gender care on their head. “Medicine and science are being politically perverted, but not by those who oppose” transgender procedures for minors, Dr. Stephen B. Levine, a psychiatrist and expert in human sexuality, told The Washington Stand. “The assistant secretary for health has a moral, political, and ethical responsibility to let science underpin clinical activities, and the independent review of science by people who don’t have an axe to grind all agree that puberty-blocking hormones and cross-sex hormones do not have a strong scientific basis.” Dr. Stephen Levine, who is not related to the undersecretary, has testified on behalf of laws prohibiting minors from making life-altering decisions before they reach adulthood in Arkansas and elsewhere.

Claiming that the science is, or can be, settled “actually negates the very essence of the scientific method,” Jennifer Bauwens, director of the Center for Family Studies at Family Research Council, told TWS. “This body of transgender literature is just at the beginning stages of scientific investigations,” and many of the studies lack proper controls or fail to measure the longitudinal impact of the decision over time, explained Bauwens, who has repeatedly detailed the scientific problems of the transgender movement’s claims. “If you’re going to say the science is settled — and I don’t agree you can ever say that — there’s more weight to saying [so-called gender-affirming care] is damaging than there is to saying it is helpful,” she said.

“Everything that the president and Secretary Levine have said about it being settled is a complete falsehood,” Bauwens, told TWS. “You simply cannot make those claims based on the research studies that are out there.”

Uncovered emails between the HHS undersecretary and others in the transgender movement prove that the Biden official knows the dearth of scientific evidence in favor of transgender surgeries. “I know that we had discussed … the possibility of gender confirmation surgery for young people under 18 years of age. This could include top surgery for trans young men and top and bottom surgery for trans young women. Is there any literature to support this protocol?” asked Levine in 2017, before being appointment to the Biden administration. Nadia Dowshen of the Gender and Sexuality Development Clinic at the Children’s Hospital of Philadelphia replied, “I’m not aware of existing literature but it is certainly happening. I think we’ve had more than 10 patients who have had chest surgery under 18 (as young as 15) and 1 bottom surgery (17).”

Medical professionals such as Dr. Michael Egnor, a pediatric neurosurgeon at Stony Brook University, warn the exponential “growth of gender-affirming surgery and gender-affirming medical care” signals “that we’re right in the middle of an extraordinary medical atrocity.” He likened the uncritical teaching of extreme gender ideology to society’s longstanding embrace of eugenics.

Rather than engage with medical experts, Undersecretary Levine said the medical profession should attack their opponents’ integrity and motivation. Levine encouraged doctors, nurses, and anyone who “love[s] our nation have to confront the fact that the language of care and compassion that they’re using is being taken to [sic] granted to literally tear our communities apart,” said Levine.

“The mantle of concern for children is being claimed to destroy children’s lives,” the HHS official said in April.

“If you’re talking about the scientific community, loving care and compassion looks like giving a critical eye to the research,” Bauwens told TWS. “If I’ve created a drug to help someone and I’m seeing reports that it’s not, then I want to do my best to investigate what’s going on, because I don’t want people taking my drug if it’s going to harm them. If you really and truly have care and compassion for someone, you’re going to be willing to let your opinion be wrong, even if it’s not your ideological stance.”

“You don’t see that with this administration,” Bauwens continued. “They demonize their opponents. They demonize anyone who actually wants to have a serious conversation about the merits of the scientific investigation.”

Levine attempted to deflect such charges in April. “I have no room in my heart for hatred and I have no time for intolerance,” said Levine at Texas Christian, while accusing his opponents of “prefer[ing] slander, bigotry and gender-baiting hate speech.”

Yet opposition to the Biden administration’s extreme transgender advocacy is not restricted to Christians or even those who believe gender is immutable. The former president of the World Professional Association for Transgender Health, who identifies as a transgender woman, said hiding children’s gender identity from their parents has caused “instances of family rupture.”

Chloe Cole, an 18-year-old woman who briefly identified as male, sued three doctors, the Permanente Medical Group, and the Kaiser Foundation Health Plan for advising her to have a double mastectomy at age 15. The procedure inflicted “deep emotional wounds, severe regrets, and distrust for the medical system,” said Cole. “I literally lost organs.” Later the same week, 32-year-old Camille Kiefel sued two “experts” who convinced her to have an “unnecessary, irreversible” double mastectomy after an “abhorrent misdiagnosis” as nonbinary.

Bauwens said detransitioners such as Cole, Helena Kerschner, and Walt Heyer, provide “good examples” by saying, “You don’t have to change who you are to be loved and accepted, and you don’t have to be medicalized for the rest of your life to be loved and accepted.” Victims “courageously standing up against a transgender activist onslaught are showing love. They’re willing to put their lives on the line against the opposition, and that’s what true love looks like. It is the laying down of your life.”

“It does not advance ‘care’ and ‘compassion’ to rush vulnerable youth into these procedures,” agreed Travis Weber, vice president for Policy and Government Affairs at Family Research Council. “The New York Times recently recognized the need to not push puberty blockers on minors.”

“This is unconscionable and harmful, and we must press the stop button,” said Weber.

Such a pause would allow society to digest the present state of research, allow studies to track the long-term effects of lifelong hormonal injections and surgeries, and put the needs of children above the desires of the predatory gender reassignment industry. “We are at a time that requires a thoughtful examination of how we ethically care for and protect our children,” Bauwens concluded.