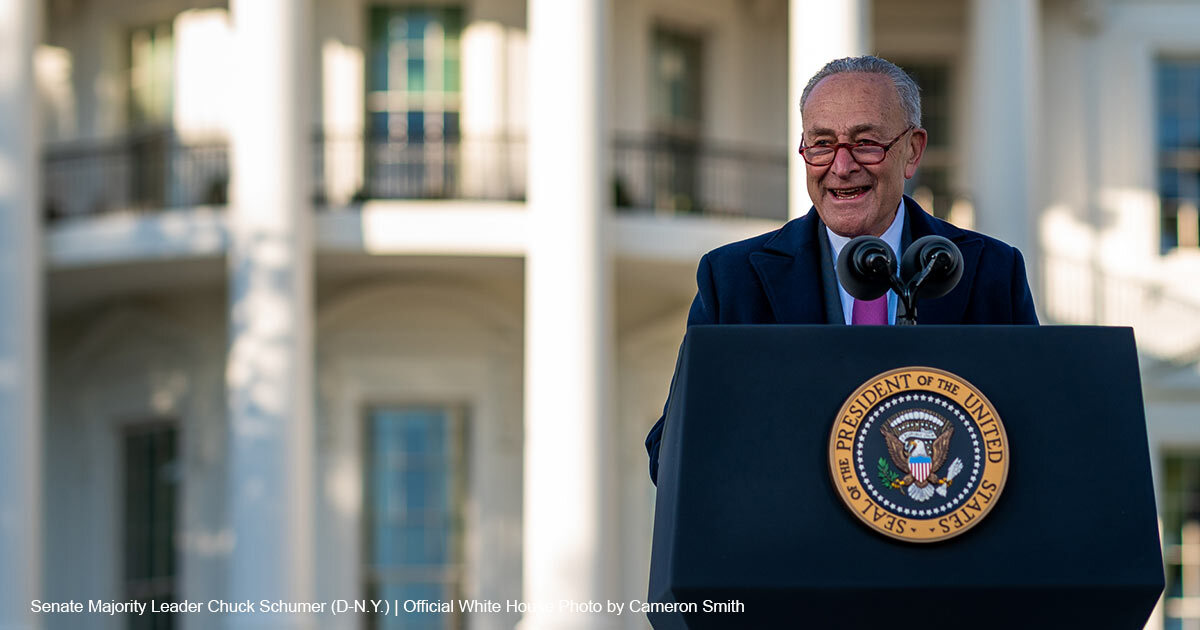 Sen. Cramer on Dems’ Same-Sex Marriage Bill: ‘We Have to Fight Back on This’

Passing a bill enshrining same-sex marriage in national law would put the existence of religious nonprofit ministries at risk and send “a pretty strong message that religious beliefs don’t matter,” a Republican senator has said.

Senate Majority Leader Chuck Schumer (D-N.Y.) vowed Wednesday to bring a bill decreeing that all 50 states must recognize same-sex marriages to the floor “in the coming weeks.” Schumer needs 10 Republican votes to overcome a filibuster — which he may find by tying the controversial redefinition of marriage bill to a measure to keep funding the government after September 30.

Some Republicans “just want to get this thing behind us, and the faster we can do that, the better. And the best way to do that is to simply give them the votes they need to pass the bill,” Senator Kevin Cramer (R-N.D.) told Family Research Council President Tony Perkins on “Washington Watch” Wednesday.

“That would be a terrible mistake,” he said. “I don’t believe there are 10 Republicans that will fall for that.”

Feedback from Christian voters has already impacted Senate Republicans’ stance on the bill. “I’m hearing from North Dakotans, which matters most to me,” Cramer told Perkins. “Overwhelmingly, they oppose this legislation. People are reading it, they’re hearing about it, and they see it for what it is.”

The bill, which Democrats dubbed the “Respect for Marriage Act,” passed the House of Representatives last month with 47 Republican votes, including House GOP conference chair Rep. Elise Stefanik (R-N.Y.). “Fortunately, the August recess came along in time for us to go home and hear from our constituents — hear from our priests and our pastors and the praying men and women of our churches,” said Cramer.

Regardless of the clerical or lay status, senators are hearing the same concern: “[T]he potential attack on religious liberties once a bill like this would pass,” Cramer stated. “In many respects, passing a bill like this really sends a pretty strong message that religious beliefs don’t matter.” Rep. Jody Hice (R-Ga.) agreed, writing in The Washington Stand that the bill “erodes their religious liberty by elevating the ‘right’ to same-sex marriage above the constitutionally-guaranteed right for people to live according to their faith.”

Lawsuits targeting Christians who will not participate in same-sex marriages have ­already cost elderly florist Barronelle Stutzman her business, hauled Masterpiece Cakeshop owner Jack Phillips to court twice, and subjected Christian adoption agencies to legal harassment for assuring their children’s adoptive homes have a mother and a father, among dozens of others. “The Respect for Marriage Act will further usher in this new era of oppression” toward faithful Christians and observant Jews, the Conservative Action Project wrote to Senate Minority Leader Mitch McConnell (R-Ky.).

If the proposed bill passes, the IRS “will then come straight at every nonprofit that believes in traditional marriage,” Senator James Lankford (R-Okla.) told Perkins in July. LGBT activists, possibly with the help of the Biden administration, will threaten the tax-exempt status of religious nonprofits — including church food banks, soup kitchens, Christian adoption agencies, and other social ministries. The Obama administration signaled the coming legal assault in 2015: The Solicitor General who argued Obergefell v. Hodges told the Supreme Court, “it is going to be an issue.” The Left plans to use the proposed law “as a weapon” to “crush anyone that opposes [their] belief in gay marriage,” Lankford said.

Grassroots Christian conservatives have gotten through even to the most vulnerable politicians. Senator Ron Johnson (R-Wis.), who originally said “I see no reason to oppose” the bill, now tells Axios, “I wouldn’t vote for it because of all the issues raised about religious liberty.”

A handful of Republicans have endorsed the legislation, which is co-sponsored by Senators Susan Collins (R-Me.) and retiring Senator Rob Portman (R-Ohio). But the vast majority have taken no opinion.

“A lot of them are making a political calculation” that Christian churches are “asleep,” Rep. Glenn Grothman (R-Wis.) told Perkins in July. The massive response by Christian registered voters — and recent election results — suggest their strategy is misguided. Numerous candidates who support natural marriage prevailed over socially liberal candidates in this year’s Republican primaries.

Senate Democrats hope the bill will give them a political win and energize their voting base before the 2022 midterm elections. Some justify the bill by citing a concurrence by Justice Clarence Thomas asking the Supreme Court to revisit Obergefell and other opinions based on a controversial legal theory. But the Dobbs decision specifically states that it does not impact Obergefell. Justice Brett Kavanaugh separately wrote that Dobbs “does not threaten or cast doubt on” the 2015 decision inventing the right to same-sex marriage.

“A vote on the Respect for Marriage [Act] is necessary,” claimed Schumer this week. But since all 50 states have already changed their marriage laws, and granted those who identify as homosexual the benefits available to married couples, legal analysts say the bill is superfluous from a legislative standpoint. “Absolutely nothing would change in terms of policies, benefits, and substantive rights for same-sex couples currently in civil marriages,” noted Roger Severino, director of the HHS’s Civil Rights division under President Trump.

While the legislation would have limited or no effect on state laws, it would potentially hamper the ministries of religious groups that feed hungry people, and “do it in a way that’s compassionate, unlike the federal government,” Cramer told Perkins.

Unfortunately, some in the church welcome their replacement by the welfare state. Some clergy “liked the idea that the government would feed hungry people, that they would clothe the poor, that they would visit the sick. And I always like to tell my colleagues: The Sermon on the Mount wasn’t delivered to the democracy or to the Congress. It was delivered to the disciples in the church and the congregation. And I just don’t want us to lose either that responsibility or that obligation as faithful people.”

Many argue that revoking the tax-exempt status of religious nonprofits, which often operate hand-to-mouth, or even suing them would greatly reduce their ministry and their ability to share their goods with the needy in the name of Jesus Christ.

“We have to fight back on this,” Cramer concluded.